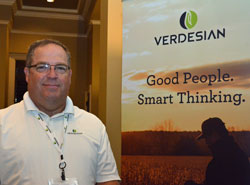 Verdesian Life Sciences was on hand at the 2016 Southern Peanut Growers Conference to talk about a new product to help producers survive.

“We have a new liquid in-furrow peanut inoculant called Primo Power CL,” said Stan Deal with Verdesian. “It’s a higher concentrated form inoculant for the rhizobia for the peanut plants and it’s going to be released this year.”

Learn more in this interview: