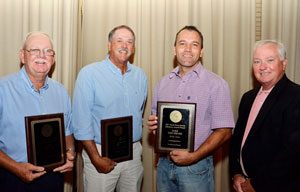 The annual Peanut Efficiency Awards were presented at the 2017 Southern Peanut Growers Conference. The annual awards presented by Farm Press are based on production proficiency, honoring growers who produce the highest yields by using inputs wisely and effectively based on a their entire farm operation.

This is the 18th year for the award program, which was known as the Peanut Profitability Awards until 2015. Program coordinator Dr. Marshall Lamb with the USDA National Peanut Research Laboratory took an historical look at nominees for the awards over the past 17 years and found they have collectively led the way for increasing yield and adopting new technology.

Learn more in this interview with Marshall: