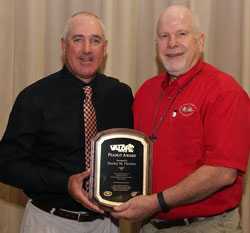 The normally talkative Dr. Stanley Fletcher was left speechless when John Altom of Valent announced that he was the winner of this year’s Valor award at the Southern Peanut Growers Conference.

“I was totally surprised,” said Fletcher, an agricultural economist with the National Center for Peanut Competitiveness who has worked on the last five farm bills and is already starting work on the 2018 bill. “Farm bills used to be you get through and you have a three year break,” he said. “Now farm bills are 24/7, 365 days a year. You have a lot of preparation before hand.”

Fletcher also presented at the last session at the conference and talked about the farm bill process.

One Comment on “Valent Valor Award Goes to Fletcher”