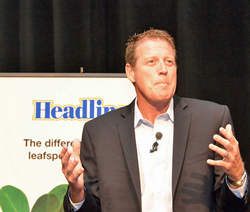 Known as “Agriculture’s Professional Funny Man,” Damian combines his sharp wit and intelligent humor with the two topics he knows best: agriculture and business. “I’m a farm boy and a farm owner, I have an agricultural economics degree, raised on a dairy farm,” he said in an interview after his luncheon presentation at the SPGC sponsored by BASF. “I make people laugh and I talk about industry issues.”

Weaving his thoughts about serious agricultural issues within his comedy, Damian hammered home the importance of communicating with the fragment of our population that knows nothing about food production. “We always use science – ‘the science of GMOs is safe’ – the consumer doesn’t care and they also don’t understand it,” he said, noting that more than a quarter of the people in the country don’t know the Earth revolves around the sun. “How do you expect them to understand GMO technology or our defense of it?”

Damian suggests that agriculture learn from the National Rifle Association and be more aggressive in defending our industry. “They are emotional, they are patriotic and they also talk about self-interest,” said Damian.

He also contends that using the argument for cheap food is ineffective. “It’s not really a selling point to at least the upper half (of the population),” Damian said. “If they cared about cheap food why would they spend $12 billion dollars on plastic bottles of water … food is an emotional decision in the United States, not a sustenance and physical decision.”

Listen to more serious thoughts from this funny guy in my interview below – and watch one of his YouTube clips to see one of the bits he did talking about farmers.

You can also learn more about Damian, find out how to book him at an event, and buy some of his cool stuff like “Agriculture – Because Starvation Sucks” t-shirts – at DamianMason.com. Thanks to BASF for sponsoring his appearance at SPGC.