Farm Press has been presenting the Peanut Profitability Awards at the SPGC for 13 years, and this year was the first time a winner from the Southeast has come from Florida. 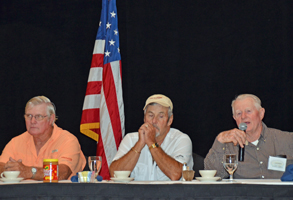 Ross, William and James Terry of I.C. Terry Farms in Lake City are this year’s winners based on 2011 average peanut yield of 5800 pounds per acre during a hot, dry summer with no irrigation.

James, pictured here with the microphone, did most of the talking for brother William and cousin Ross. “We been growing peanuts since World War II. My daddy started peanuts back when they had stationary harvesters,” James said.

One of the ways they stay profitable is keeping equipment running as long as possible. Their newest tractor is 12 years old and the oldest is 40, “and it still runs and gives us good service, so why get away from it?”

James believes that peanuts are a pretty forgiving crop and the good Lord sends rain when they need it, which is why they don’t use irrigation. “Why waste all the extra water? Peanuts only need water a couple times critically. If they get water at those times, they’ll make peanuts.”

Listen to an interview with James:

The other regional winners this year were Bud Bowers of Luray, South Carolina and Joe White of Frederick, Oklahoma. It was also the first time that an Oklahoma grower won in the Southwest region.