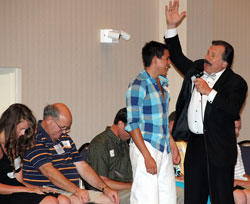 Thanks to Bayer CropScience the conference opened with some entertainment that also provided some inspirational and practical ideas for improving your life. On the stage was Dr. Holiday, The Hilarious Hypnotist.

Before getting the show going he talked about using self-hypnosis to facilitate achieving most personal goals. He’s a big advocate of relaxing and then taking action. Then he got volunteers to come forward to be hypnotized. About half made it and he then used them as a live demonstration. It was fun and everyone had a good time, including the volunteers.