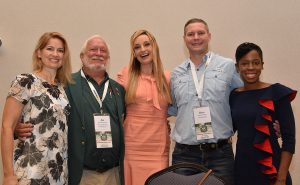 A “superfood” is considered to be a nutrient-rich food that is beneficial for health and well-being, so peanuts naturally qualify, and that is something super important for farmers and the industry.

Samara Sterling, Ph.D., director of research for The Peanut Institute, says, “When you compare peanuts to kale, it’s a stark difference in terms of the amount you need to consume to reap the food’s benefits. For example, one serving of peanuts contains six times as much protein as a serving of raw kale and eight times as much niacin.”

Sterling joined Parker Wallace of Parker’s Plate and Sherry Coleman Collins with the National Peanut Board on a panel at the 2019 conference to talk about how peanuts have risen to the ranks of superfood. Listen to their opening remarks here: