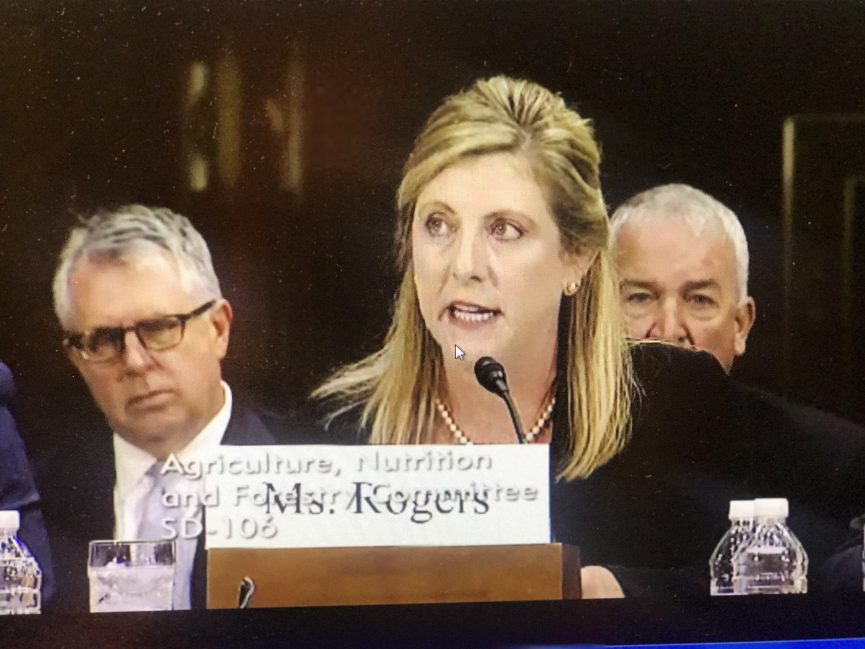 WASHINGTON, D.C. – Meredith McNair Rogers, a more than 20-year veteran farmer from Camilla, Georgia, testified today before the Senate Agriculture Committee that the peanut provisions included in the 2014 Farm Bill and Price Loss Coverage (PLC) program work for farmers and consumers – and must be preserved in the next farm bill.

In her testimony, Rogers, who testified on behalf of the Southern Peanut Farmers Federation, said, “[Congress] provided a program that pushed our industry to market our products more efficiently in the domestic and export markets.” It is a common-sense and market-based solution offering farmers a price floor that promotes stability and access to lending amidst market uncertainty.

Rogers testified before the full Senate Agriculture Committee at today’s hearing, “Commodities, Credit, and Crop Insurance: Perspectives on Risk Management Tools and Trends for the 2018 Farm Bill,” on behalf of the Southern Peanut Farmers Federation.

As Rogers stated in her testimony, The Federation supports maintaining the current PLC program in the 2014 Farm Bill including the following key provisions:

Citing the U.S. Department of Agriculture’s projection that net farm income in the U.S. for 2017 will hit $62.3 billion – a 49.6 percent decline since 2013 – Rogers affirmed the value that the PLC program provides for farmers in her community. “If the PLC program had not been in place, I am afraid many farms in the Southeast would no longer exist.”

Rogers also noted that the downturn in the farm economy over the last three years comes at a time when demand for peanuts outpaces supply, as evident by early reports of contract prices for the 2017 crop that range from $475-$550/ton. “Shellers would not be offering these types of contracts unless signals from manufacturers and exporters clearly indicate that they need more peanuts for the marketplace,” Rogers said. “These actions are not being driven by the 2014 Farm bill but instead by the markets and the rules of supply and demand.”

“The bill continues to assure consumers a safe, affordable food supply,” Rogers stated. In addition, the system in place ensures stability in times of both prosperity and times of economic downturn, which enables farmers like Rogers to continue producing the peanuts that people around the world know and love.

For more information and a copy of the complete testimony provided by Rogers visit, www.southernpeanutfarmers.org.