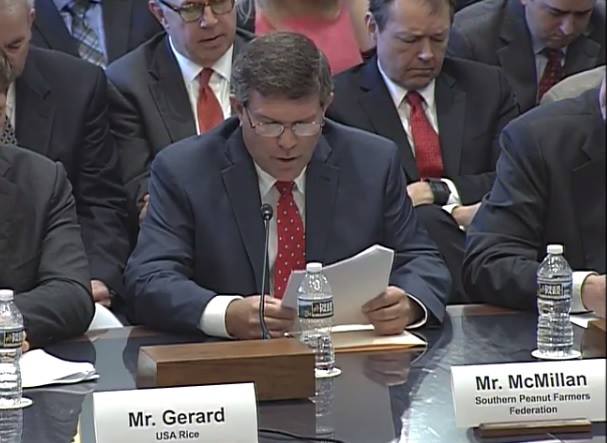 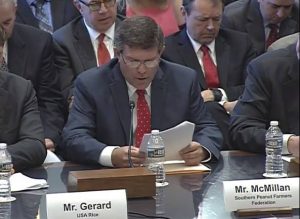 Tim McMillan, farmer from Enigma, Georgia, testifies on behalf of the Southern Peanut Farmers Federation today at the hearing titled, “The Next Farm Bill: Commodity Policy Part II” before the U.S. House Committee on Agriculture Subcommittee on General Farm Commodities and Risk Management.

WASHINGTON, D.C. – Tim McMillan, farmer from Enigma, Georgia, testified today in support of maintaining the peanut provisions of the 2014 Farm Bill and the Price Loss Coverage (PLC) program in the next farm bill. In his testimony, McMillan says, “If the PLC program had not been in place, I am afraid many farms in the Southeast would no longer exist because of the downturn in the farm economy which has plagued us the past three years.” McMillan testified on behalf of the Southern Peanut Farmers Federation today at the hearing titled, “The Next Farm Bill: Commodity Policy Part II” before the U.S. House Committee on Agriculture Subcommittee on General Farm Commodities and Risk Management.

According to McMillan, the Federation supports maintaining the current PLC program in the 2014 Farm Bill including the current reference price for peanuts, a separate peanut payment limit and storage and handling provisions.

According to McMillan’s testimony, the 2014 Farm Bill was drafted during a period of high prices on the farm. “When we compare average prices in 2011-12 to 2016 prices, we see a 30 percent decline in peanut prices,” he says. “I see the real impact of these numbers in the faces of my neighbors and hear it in discussions with lenders and our suppliers.”

The U.S. Department of Agriculture projected 2017 net farm income in the U.S. to be $62.3 billion which translates to a 49.6 percent decline in net farm income since 2013.

The PLC program has worked for peanuts, McMillan adds, but peanuts are not sufficient to carry an entire farming operation. “In a time when corn and cotton prices have been depressed and with the lack of a cotton PLC program, more pressure has been placed on farmers to plant peanuts by lenders,” McMillan says.

Currently, demand of peanuts has kept pace with the supply of peanuts. U.S. per capita peanut consumption increased 12 percent from 2012 to 2016. The peanut industry has also witnessed strong growth in the export market growing by 71 percent between the 2008 and 2014 Farm Bill.

For more information and a copy of the complete testimony provided by McMillan visit, www.southernpeanutfarmers.org.