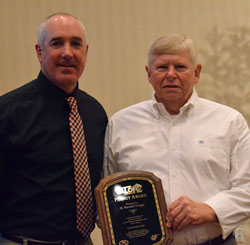 The recently semi-retired executive director of the Alabama Peanut Producers was surprised to be honored with the annual Valent Valor Award at the kick off of the 16th annual Southern Peanut Growers Conference in Panama City Beach.

“I like to know what’s going on and all the details and this is something I sort of missed,” said Randy after receiving the award from John Altom of Valent. “I’m touched and I’m humbled.”

Randy retired from the Alabama peanut growers group in December but he agreed to remain involved with the Southern Peanut Farmers Federation at least through this meeting. Announcing the award to his friend and colleague, Don Koehler of the Georgia Peanut Commission noted that the conference was Randy’s idea back in the late 1990s, but Randy says it is totally a group effort. “Something like this is team work, it’s not one person,” he said. “We couldn’t have done it without the producers and the industry to make this conference what it is.”