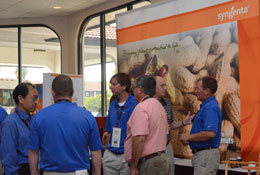 Syngenta is one of the companies that has been a sponsor of the Southern Peanut Growers Conference since the very beginning, and for good reason.

“We live and die by peanuts,” says Syngenta’s Lyle Stewart who has been handling the southeastern district for the company nearly two decades. “We’ve always have a tremendous portfolio for peanuts and we continue to.”

Lyle says next year they have a new fungicide coming on the market called Elatus, which we will hear more about soon.