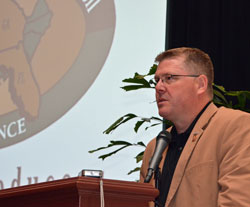 In keeping with a fine tradition of bringing outstanding farm state lawmakers to the Southern Peanut Growers Conference, this year we were honored to hear from Rep. Rick Crawford of Arkansas, a member of the House Agriculture Committee.

Crawford talked about the struggles in getting a farm bill finally passed this year and his belief that it should be called the USDA Re-Authorization Bill, like other agencies like the Department of Defense, for example. “This would, I think, help us to communicate more efficiently just exactly what we’re doing,” he said. “It’s semantics is what it is, because the reality is that 80% of this authorization is nutrition.”

Crawford also discussed his concerns with the Environmental Protection Agency’s proposed Waters of the United States (WOTUS) rule, particularly its ambiguity. “The ‘significant nexus’ being utilized as their determining factor of whether a body of water is going to be regulated,” said Crawford, noting that is a subjective determination and it’s not clear who will make that determination.

Hear my interview with Rep. Crawford and his address below:

2 Comments on “Arkansas Congressman at SPGC”