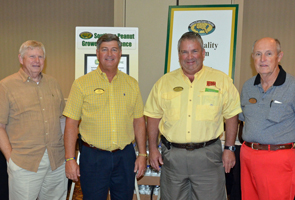 Getting off to a great start here at the 15th Annual Southern Peanut Growers Conference I met up with all four of the state executives for the associations involved in the event as soon as I arrived on the scene at Panama City Beach.

As usual, I asked each of them to talk about the condition of the crop in their states and what the biggest concerns of the growers are right now. Randy says the Alabama crop is “wet, wet, wet” right now. In Florida, Ken says the state is pretty much a “mixed bag” with “an excellent crop in half the state and a questionable crop in the other half.” Don reports that the Georgia crop is “like a Clint Eastwood movie – the good, the bad and the ugly.” Finally, Mississippi is a little wet in the traditional southern peanut growing area of the state “but the northwest corner of the state, which is a new area, is extremely dry,” according to Malcolm.

Meanwhile, all farmers are waiting to see when and if they will finally get a farm bill this year, which we will be hearing more about on Saturday here at the conference. The theme for the 15th annual event is Making Sustainability Work, an issue which is important to all the growers as well.

Randy and Don have been a part of the SPGC since the beginning in 1999. “We started out with about 3 or 4 sponsors and the first year we had about 250 people,” said Randy. “We’ve seen it just constantly grow ever since.”

Listen to my interview with the fab four: