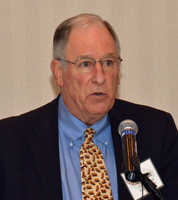 The peanut industry is working toward an important goal that will ultimately serve to make peanut production more sustainable than ever. That is the mapping of the peanut genome.

“What we’re looking for is traits that will be resistant to diseases, nematode, leaf spot, or will have traits we want like high oil or improved protein content,” said George Birdsong, a member of The Peanut Foundation Peanut Genomics Initiative. “If we can accomplish this, it will result in many benefits to the industry.” 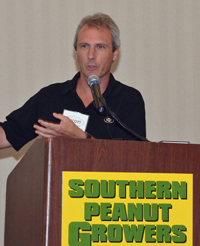 The whole concept of genome mapping is pretty much beyond the grasp of most of us non-scientific types,, but Scott Jackson with the University of Georgia helped to bring it down to the layman’s level during his presentation at the SPGC.

“This has been done for numerous other crops such as rice, cotton, sorghum, maize and soybean,” Scott says. This has helped seed companies and the farmers they serve tremendously. “The application of genomics..has reduced the time from the initial cross to releasing a variety by as much as 50%. That’s what we really want to see in peanuts.”