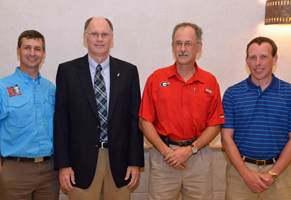 Most folks in the peanut industry know the guy in the suit pictured here with a few other members of the University of Georgia Peanut Team. But as of the end of this year, Dr. John Beasley will be retiring from UGA after 30 years to become head of the Department of Crop, Soil and Environmental Sciences at Auburn University on January 1, 2014.

“It’s the department where I got my bachelor’s degree a very long time ago,” said John. “It will be a change for me. I’ve been a peanut agronomist for a long time.” In his new position, John will have a role in all kinds of crops grown in the region, but he says he will still be involved in the peanut industry and expects to be at the SPGC next year.

Unfortunately, John won’t be continuing his role with the Georgia Peanut Achievement Club, which inducted its newest high-yielding members during the SPGC, but he leaves the program in good shape.