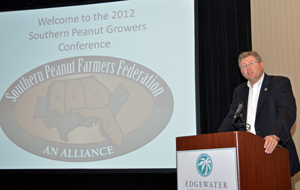 At a very critical time during the process of getting a new farm bill passed, the chairman of the House Agriculture Committee came and spoke to peanut producers attending the Southern Peanut Growers Conference in Panama City Beach.

Congressman Frank Lucas (R-OK) went through the process of how his committee worked to mark up a farm bill, technically called the Federal Agriculture Reform and Risk Management (FARRM) Act, following the legislation that was passed by the Senate. “The Senate language works really well in the Midwest, but it doesn’t work very well, according to my experience as a farmer, for everybody else,” he said. “It violates that fundamental rule of everybody needs to be able to participate.”

Lucas is pleased with the bill his committee developed and he is hoping it will get to the floor. “I’m telling my leadership in a very respectful fashion, I have 35 billion real dollars in savings,” he said, noting that there are extremists on both sides who are not pleased with it. However, he says, “A farm bill has always been process of consensus of the functioning middle.”

Listen to Chairman Lucas’ remarks via audio or video below:

One Comment on “Chairman Lucas Speaks to Peanut Growers”