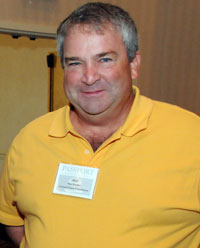 Don Koehler, Executive Director, Georgia Peanut Commission, helped me wrap things up for the conference. As of this point in time everyone has a free afternoon before our concluding dinner this evening. I’ll be adding some photos from that event to the photo album. You can also find another set of photos taken by Joy Carter, Georgia Peanut Commission on her photo album with this link.

Don says the conference attendance has been consistent with previous years in spite of the economy and gulf oil worries. He says farmers are all positive and that’s the best word to describe the conference. The mood is upbeat and even with some areas needing some rain. He’s looking forward to conference number 13 next year. The move to an end of the week program has been very positive so that’s likely to be the schedule next year too.

Listen to my interview with Don here: