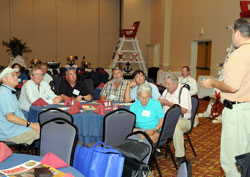 According to the peanut farmers I’ve spoken with here at the conference, their local county extension agent is a very important resource for them. The Georgia Peanut Commission made sure that some of them could be here. One of the ones I met was Rusty Harris, Wirth Co., GA. He was participating in the Georgia Peanut Achievement Team meeting yesterday. He says his county is the number one peanut producing county in the state.

He says it’s an honor to be able to attend and appreciates the support of the GPC. This is his first time attending and he believes it’s the premier meeting in the country for peanut producers. Right now he says crop conditions in his area are very dry so irrigation is a top of mind issue. However, he sees it as just another normal year.

Listen to my interview with Rusty here: