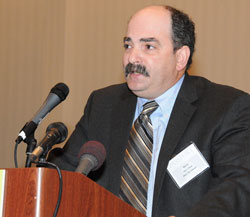 Showing farmers how to get involved in renewable energy was Steve Flick, Show Me Energy Cooperative. Steve thinks his participation on the program was a two way educational experience since he learned a lot about peanut farming while he was here.

Steve says they have shown that farmers can produce renewable energy on a local level and peanut farmers in the south can do the same thing. He says it will allow them to make productive use of unproductive land. He says they are in control of their own destiny. With the organizational structure that exists it’s an opportunity to learn how to build and operate a plant just like they’ve done.

Listen to my interview with Steve here: