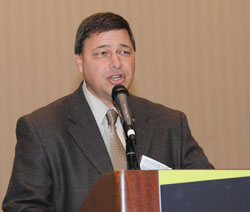 The new Dean of the College of Agriculture at Auburn University, Bill Batchelor, joined us this morning. I spoke to him about his new position on a break.

Bill comes from an ag engineering background and sees dealing with the realities of the economic downturn as a priority for the school. He says that they have to learn how to do more with less so they’ll be looking at ways to maximize their resources. He sees peanuts contributing significantly to human nutrition as it grows in importance along with the population.

Listen to my interview with Bill here: