The peanut probably originated in Brazil or Peru, although no fossil records exist to prove this. Peanuts were grown as far north as Mexico by the time the Spanish began their exploration of the new world. The explorers took peanuts back to Spain, where they are still grown today. From Spain, traders and explorers took peanuts to Africa and Asia. Africans were the first people to introduce peanuts to North America. Eventually, peanuts were

planted throughout the Southern United States. Today, peanuts are one of America’s favorite foods.

George Washington Carver, considered the father of the peanut, began his research into peanuts in 1903 at 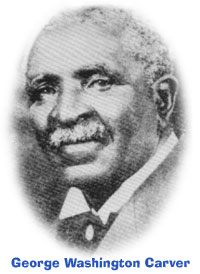 Tuskegee Institute in Alabama. The talented botanist recognized the value of peanuts as a cash crop and proposed that peanuts be planted as a rotation crop in farmers’ fields. This procedure was especially valuable in the Southeastern cotton growing areas when boll weevils threatened cotton crops. Farmers across the region listened to the great scientist and peanut production flourished. Additional research into the peanut helped Carver to discover over 300 uses for the peanut including shaving cream, leather dye, coffee, ink, and shoe polish to name a few.

Today nearly half of the peanut crop in the United States is grown in Georgia. Last year, 70 counties in Georgia produced 965,000 tons of peanuts with Mitchell, Worth, Miller, Decatur and Early counties producing the most. Georgia has approximately 14,000 farms with peanuts and about 3,500 active farmers. 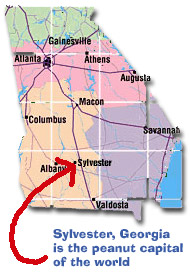 Although peanuts come in many varieties, there are four basic types grown in the United States today. They are: Runner, Spanish, Valencia and Virginia. Each type is unique in size, shape and flavor. Runner peanuts are mainly grown in Alabama, Florida and Georgia, and over half of the Runner peanuts grown in the United States are used to make peanut butter. Spanish peanuts, grown mostly in Oklahoma and Texas, are primarily used to make candies and peanut oil. Valencia peanuts are mainly grown in New Mexico and are the sweetest of the four types. Virginia peanuts, grown in Virginia, North Carolina and South Carolina, are mainly roasted and sold in and out of the shell.